New Season: Time for a change 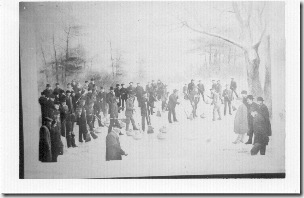 Sometimes when I step on the ice, I feel as if I’m heaving a rock through the snow, just like the guys in this picture (taken around 1890 in Fergus, Ontario).

Last season, our club team won less than half of its games. We struggled with our weight – on what is admittedly pretty inconsistent ice – our sweeping calls, even our strategy at times.  We were being beaten by teams that we should have walked over.  As vice, I couldn’t believe how many times I kicked the rocks back to the boards at the conclusion of an end while watching my opponent put up the score – end, after end, after end.

And then, suddenly and unpredictably, we’d have a great game.  Solid deliveries, perfect calls, stolen ends galore.  Unfortunately those nights were few and far between. The really frustrating part of it all was not knowing why we were doing so poorly.  Previous years we’d been in the playoffs, were a team to be reckoned with.

I think we were just stale.  My skip decided to take this season off to focus on hockey, so I decided it was time for a change too.  Not a year off, but a move.  Across town to a ladies’ league in a larger club.

Yes, it will be a big change.  For one thing, I’m used to competing and socializing with the boys.  And I’m also used to the relaxed, small-town feel of our little 4-sheeter. This is the big time: 8 sheets of ice in a club that has turned out provincial champions (not that the Business Womens’ Monday Night Social League will include a full roster of elite curlers, of course!).  It will be a different environment, a different feel. A change.

And I’m a firm believer that a change can provide a much-needed jolt. New faces, new ice, new feel – new curling experiences. That’s exactly what I hope will rejuvenate my game.

Posted by Jean Mills at 4:20 PM No comments:

You know you’re a curler when… …you’re on holiday at the cottage in Nova Scotia, visiting with your cousin next door. He’s a retired RCMP officer from Saskatchewan, and you’re catching up on local gossip and family news from the past year. Eventually, however, the conversation rolls around to – what else? – that eight-ender scored against him in a game thirty years ago.

Posted by Jean Mills at 8:09 PM No comments: