Men With Brooms coming to a TV near you this fall

Okay, I confess that I have a thing for Paul Gross.  Due South was brilliant – great idea, great writing, subtle shifts between drama and comedy (see the episode “A Hawk and a Handsaw”) and wonderful performances from some of Canada’s best – Callum Keith Rennie, Gordon Pinsent, Wendy Crewson, Brent Carver, Colm Feore come to mind.  And how about Getting Married in Buffalo Jump and Slings and Arrows and Gross’ performance as Hamlet at the Stratford Festival?  And then, more recently, there were all those Genie Awards for his writing, producing and acting in Passchendaele.  He’s also a musician. And not too hurtin’ in the looks department, either.

So when the film Men With Brooms came out in 2002, I was in heaven.  Paul Gross and curling.  Kind of silly curling, kind of rough-around-the-edges Paul Gross, but still a combination of two acquired tastes, nicely melted into a bad-boy-makes-good sports film including the improbable (really? throw it so hard that he smashes the rocks – twice?) and the impressive (familiar faces of Canadian curlers like The Curling News’ George Karrys and spinerama ace Jeff Stoughton). Ok, maybe a bit over the top.

Who cares, said I.  Paul Gross and curling.  Does it get any better?

Now CBC is actually going ahead with a sitcom based on the film, including Gross in the show, although not as the central character. But that’s okay.  He got the stone sliding, so to speak, and now other creative types, including producer/writer Paul Mather can sweep it along – hopefully into a something with the charm of Corner Gas or Little Mosque on the Prairie. (Interesting but not terribly important fact: Both shows did curling episodes:  “Hurry Hard” and “Jihad on Ice”.)

Want to know more about the TV version of Men With Brooms?  Check The Curling News for all the deets.

Curling in the Zoo

It was snowing here in Southern Ontario a few days ago, an unusual weather report for mid-May. And although the leaves are almost all out and the tulips are done – which means Spring has sprung and moved on – I couldn’t help thinking of curling.  So to say a final farewell to the winter, I revisited some mail I received from Jason Hall of the Kalamazoo Curling Club.  This past February, Jason sent me some great photos of Kalamazoo curlers playing the game “au naturel”.

Now, now – don’t get too excited.  This is what he meant: 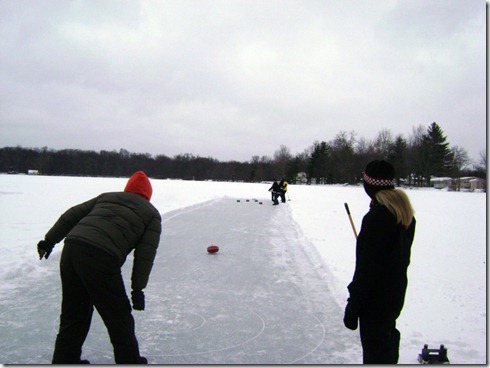 No, this isn’t a shot of the Kalamazoo Curling Club.  It’s an afternoon of throwing some rocks on real Mother Nature-created ice, just the way it was done when the sport first came to North America.  Here are some Fergus, Ontario, curlers doing the same thing on the the Grand River in 1890. 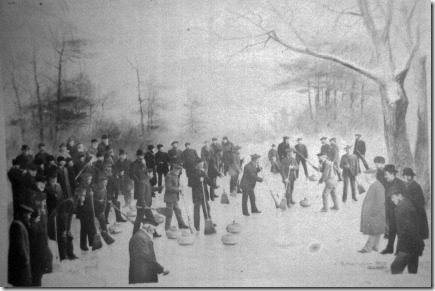 All you have to do is gather some usable rocks, shovel off a stretch of the lake or river, and Game On!

See the house rings scratched into the ice?  Obviously the technique had to change a bit.  The curlers above used chunks of granite from rocks found in their fields, or blocks of wood smoothed and weighted.  The curlers from the Zoo appear to be using a set of Little Rocks. Smart!  Although the current thrower does look a bit as if he’s thinking “bowling” instead of “curling”…? 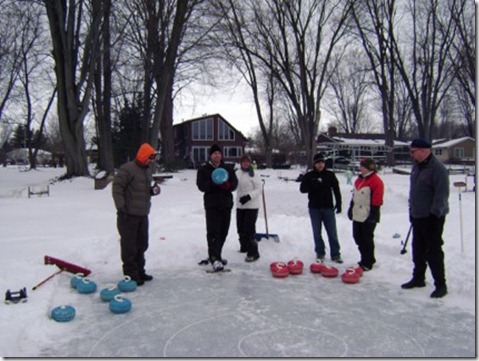 “We've been having a great time down here in Kalamazoo,” Jason wrote to me in February, just as the Olympics were winding down.  “Being able to watch curling on TV is a real treat for us Americans. We're very much looking forward to hosting the US Curling National Championships here in another week or so, and looking forward to the direction in which our new club is headed.”

Curling in the Zoo appears to be headed in the right direction.  Check out the Kalamazoo Curling Club website, here.  Thanks for the pics, Jason!