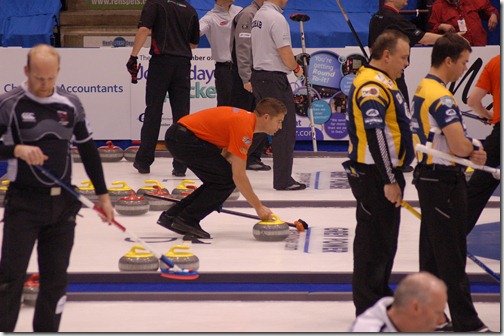 Curling is so cool right now.  Of course you and I knew that already, but apparently the World needed some prodding.  And oh, did the Vancouver Olympics ever deliver!

Word from curling clubs around Canada and the U.S. is that interest is on the rise.  Watch for an article in the April issue of The Curling News for more, but here are some early indications that curling is more than alive and well:

Judy MacKinnon, General Manager of the Cloverdale Curling Club in Surrey, B.C. says:  “My phone has not stopped ringing for ice rental, minor hockey windups, young 15-30 guys and gals looking to try the sport.  It seems that curling is not referred to as an old person’s game as it has [been] in the past.”

Arnold Mallais, Past President of the Beausejour Curling Club in Moncton, N.B. says:  “Since the Olympics, the Brier and our provincial events, our ice bookings have certainly increased.”  He adds that ice rentals are ahead of last year, “and all in all, I would have to say that the awareness is up!”

Doug Jaixen of the Aksarben Curling Club in Omaha, Nebraska, describes an Open House held at his club just after the Olympics: “From the e-mail and phone inquiries we were receiving prior to and during the Olympics we anticipated a total of 100 to 150 people were going to show up.  We have a sign-in list with 355 names and contact information.  At least 450 people stepped onto the ice and learned how to curl that evening.  We were not quite prepared for 450 people but we adjusted quickly.”  Guests were given only 15 minutes of instruction on the ice – not much time, but it was the only way the club could give everyone a chance. And it worked!  Doug adds: “We had five full teams from the open house sign up for our season-ending bonspiel.  At least three of these teams said they will be playing in our leagues next season!”

And yes, even the guy wearing the orange shirt in the photo above (in action at The National Grand Slam event in Guelph, Ontario in January) was a beginner once too.  Now?  Now he’s just cool … and an Olympic gold-medalist, of course!

Undefeated Curling Masters Off to Nationals 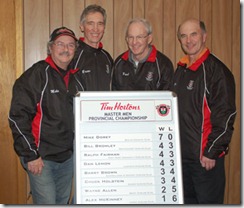 A team from the Guelph Country Club is off to St. John, New Brunswick, for the Canadian Masters (age 60+) Curling Championships, and they have yet to lose a game in bonspiel or competition play: that means 18 straight wins this season.

Skip Mike Dorey, third (“mate” in Saint John) Brian Henderson, second Gary Houghton and lead Paul Knight knew they had something good when they got together early in the year and the wins started flowing.

“We have curled against one another for years at the Club,” says Knight. “I played with Mike and Brian last year in the Masters but we didn't do well. So, since Brian and Mike curled with Gary in Senior Regionals, and I was already on the team, we asked Gary if he would play 2nd (he's a great hitter) and then Mike would skip as he normally does with Brian as vice, and me as lead. The combo really clicked.”

Although they’re not familiar with the teams they’ll be curling against, they’re not worried. They know what they’re capable of, and that’s what matters.  All four have ice-reading ability and a high level of fitness.  As Dorey said in a local Guelph Tribune article, “We think we’re quite capable of playing guys 50 and over with this team.  We don’t feel that we have an old-folks attitude or ability.  In fact, all of us throw the rock pretty good.  I could say “given our age”, but I would say we throw the rock pretty good period.”

The Masters may not get the attention that other Canadian curling championships (such as the Brier) do, but that could be changing.

“The CCA sanctions the event in Saint John,” Knight explains, “but we are probably one year away from full financial support; the OCA rep believes we are very close. And with 13 men’s teams and 12 women’s teams this year at the Canadians, from every province and territory, that has to get the CCA attention.”

What will get more attention, most likely, is the record this team has coming into the competition.  When word gets out – 18 straight wins and undefeated in OCA playdowns – the target may be squarely on the backs of this Ontario foursome.

Posted by Jean Mills at 8:50 AM No comments:

Abby and the Curling Chicks: Curling fiction on the way 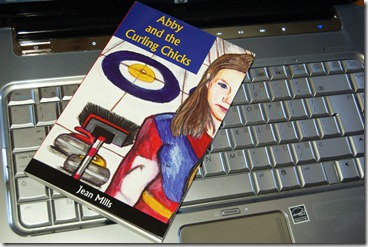 All the attention that women’s curling garnered at the Olympics lit a flame (ha ha) under me to get working on some projects that have been lying around untended for a while.

A number of years ago I published a novel for teens called Abby and the Curling Chicks, a story aimed at a group of curling girls in a small town in Ontario. Using my experiences running a junior program at the Vankleek Hill Curling Club, I told the tale of Abby Chisholm who agrees, reluctantly, to join a junior program at the local club in exchange for attending a summer writing program. (Hmm, a girl who curls and writes – sounds somewhat autobiographical…) Of course, Abby and her friends turn very quickly from being ho-hum to being gung-ho, with thrills and spills along the way. The book sold very well through Goldline Curling Supplies, as well as through the Canadian Curling Association online store. A niche story for a niche market.

Readers have asked me when there’s going to be a sequel, and my response has always been “I’m working on it.” But now I can say yes, really, I am. With the recent post-Olympics rise in attention to curling – in particular women’s curling – I think it’s time I really got down to work. I’ve got six chapters written on the next installment of Abby’s story, tentatively titled Abby and the Curling Chicks: Trouble in the House.

Not only that, but my story about a Little Rocker named PT McReady, who “shoots the lights out” is underway as well.

And don’t get me started talking about the mystery I’m writing, set in a small town curling club where everyone knows everyone, and secrets abound…but be warned: I don’t do blood very well, so it will be a “cozy” mystery rather than a hard-boiled, gritty police drama.

The possibilities are endless for curling fiction, and I’m on the job. Stay tuned to Grassroots Curling for updates. If you’re interested in reading Abby and the Curling Chicks, you can order it through Pugwash Publishers.

Posted by Jean Mills at 2:46 PM No comments: