CurlingGeek is for curling geeks - I mean, fans - anywhere

So, there I am at the Capital One Road to the Roar - the Canadian Olympic Pre-Trials - in Kitchener this past week, watching Draws 1-18 until I think even I have the tricky ice on Sheet E figured out...

I'm writing a game summary to go on the CCA website (yes, this is my day job) and get distracted by a question/phone call/great shot on another sheet. When I look back, there's Gushue's teaming kicking the last rocks to the backboards and walking away to huddle with the skip before the next end starts. What? The end finished and I have no idea where that steal of two came from! I look down at the ice.....

.....and think to myself: How can I find out what just happened?

Aha! I turn to my secret weapon called CurlingGeek. My heroes, providing shot-by-shot game animation - it looks like one of those magnetic strategy boards - with replay capability, as well as offering commentary on the action (sometimes the commentary is way more entertaining than the action. Just saying, Geeks...) AND a place to chat with other curling fans watching the game. Fans in the arena. Fans at home. Fans in other countries.

Strange as it may seem in this wired age, we don't always have access to video replay. This week in Kitchener, there was no TV coverage until TSN showed up on the weekend. So what's a distracted sports writer to do? For that matter, what's a fan at home or in some distant location to do?

That's the exact void that the CurlingGeek team is trying to fill. They pick a few games (at the Road to the Roar it was two games at a time when two Geeks were on duty) and they provide an alternative on their CurlingGeek.com website for fans who want to experience the game remotely.  OK, the Geeks might not be following the game you want to see, but the Scorekeeper's Notes always include reports from other sheets in action at the same time.

And if you ARE at the game, or watching on TV, the Geeks give you a forum to chat online with other fans, comment on the game, and be part of a one-game-at-a-time curling community. In other words, you too can be a curling geek.

Hardworking (hey, it's cold up there in the rafters of an arena!), efficient and, may I say, thinking outside the box. I'm their newest fan.

Posted by Jean Mills at 2:23 PM No comments:

What makes a good Thanksgiving Weekend for a curler?

What makes a good Thanksgiving Weekend for curler? Here's my list:

1. It starts on Friday night by helping at a six-sheet Learn-to-Curl at the Guelph Curling Club for a group of non-curlers in town for a wedding, and realizing I'm still feeling the effects of the Team Howard Fantasy Curling Camp a week ago...

2. There's beautiful weather for a walk in the woods (to stretch out those sore muscles) and no shortage of Thanksgiving turkey, turkey, turkey (no explanation required....)

3. There's tons of results coming through on Curling Zone,

4. There's a curling clue in The Globe's Saturday cryptic crossword! 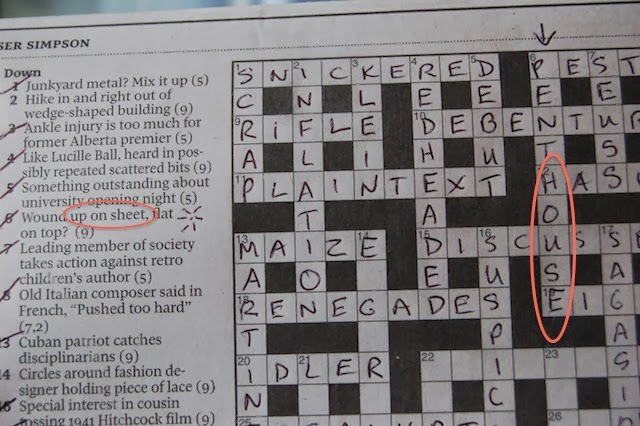 Curling lingo: Anyone ready to weagle?


During the 2010 Vancouver Olympics, a friend of mine said she was watching curling and couldn’t understand a bloody thing.

“Oh, I can explain the rules to you,” I offered.

“No,” she said. “It’s the LINGO. What the hell are they talking about? In-off, slash double, turned it in, heater, board weight…WTF??”

True. We curlers do have a language all our own, and after her comments, I started listening more clearly to what Vic, Linda and Russ (as well as other curling commentators on other networks) were saying.

Of course it made perfect sense to me, but I’ve been speaking the language for years. I’m reminded of the looks on the faces of the high-school curlers I coached this year as I explained why trying to “steal one without, take two with” were some of the options they could try. Wha?

Curling lingo has developed over the years. The curlers who joined my parents on the ice at CFB Downsview back in the sixties probably wouldn’t understand much of the commentary either, although they knew the game well enough and would probably figure it out. But for a newcomer to the sport? Watching it on TV must be quite a challenge – as my friend suggested.

It’s not just that the sport has its own terms – every sport has that. But curling language is evolving. “Hurry hard” is the familiar skip’s call for sweeping, but you can thank Russ Howard for that one. I’m not certain, but I seem to recall it was the late Sandra Schmirler who introduced that wonderful description of what a good take-out should do: “Make it go away.” (Open to correction here. Anyone?)

And of course the 2012-2013 season saw the introduction of a new curling term: the Weagle. Or “to weagle” – as in, tick a guard out of the way, but not out of play, a tactic that works wonders to combat the aggressive four-rock free-guard-zone rule.

As a writer, language is my passion. As a curler, the words that describe and drive my game are tools. I love that the toolbox is full of lively, meaningful, creative and innovative language, and I love that the sport is growing and changing.

Posted by Jean Mills at 7:30 AM No comments: