Hockey books abound…but what about curling?

Tis the season of book reviews. Newspapers and magazines and even those specially printed advertorial mags in Chapters are pushing books you can pick up as gifts for Christmas.  I had some fun reviewing four hockey books for my local newspaper and scored copies of Don Cherry’s latest, Al Strachan’s tell-all, and a couple of argument-inducing “best goals ever” collections.

Hockey gets all the attention, but there are tons of curling books out there, too. It’s time they got some attention, so here’s a sample from my own shelves (with quick descriptions) to get you started. Please, feel free to suggest others so we can make a definitive list.  Here goes:

1. Abby and the Curling Chicks by Jean Mills

Ok, you knew I was going to start with my own book!  C’mon people!  It’s a YA novel aimed at young readers, set in a small town, all about girls who are reluctantly enrolled in a kids’ curling program and find out they actually like the sport. Not everyone’s taste, but younger kids seem to like it. You can find a sample chapter and ordering info here.

Russ’ background in curling and his run up to and including the 2006 gold medal in Torino with Brad Gushue. Lots of inside deets on the Olympic experience, and some funny behind-the-scenes stuff too. And here’s another book by Russ, Curl to Win, released this year. Read it and (presumably) start your climb to Olympic glory.

3. Curling Secrets: How to Think and Play Like a Pro by Colleen Jones

Colleen Jones knows and loves the game – and she’s had tons of success. After a bit of a break, she’s back in the competitive ranks this season.  So what’s her take on playing the game as if you, too, were headed for the pro ranks? Lowly club curlers, this is one way to find out.

4. Curling for Dummies by Bob Weeks

A classic. And Bob – a terrific writer who does not need the assistance of a ghost writer (unlike some of the other “authors” on this list…ahem…) – has another fun book as well, Curling Etc. and  Whole Bunch of Stuff about the Roaring Game.

5. Canada Curls: The Illustrated History of Curling in Canada by Doug Maxwell

The late Doug Maxwell, a journalistic giant who passed away in 2007, wrote about curling with humour and respect while drawing on a seemingly unlimited supply of knowledge and experience. This is a terrific book.  And if you want more of Doug, read Tales of a Curling Hack. Another delight.

6. Fit to Curl by John Morris and Dean Gemmel

John Morris is pretty fit, wouldn’t you say?  This book shows how you can look just like Johnny Mo. Well, maybe not.  But it’s certainly worth a try, and here’s the recipe to help.  And if you want to keep up with John’s “how-to” message, check out his blog, Fit to Curl, on the Canadian Curling Association website. Check out Dean Gemmel’s podcast, The Curling Show (find it on iTunes) for weekly interviews with curling’s best and brightest.

7. Between the Sheets by Cheryl Bernard and Guy Scholz

It’s not all on the ice, people.  See what crowd-pleasing Olympic silver medalist Cheryl Bernard – she of the many marriage proposals from besotted fans – has to say about preparing yourself for the game.  And you can follow her advice by reading her CCA blog too, Between the Sheets.

8. Books about and by other famous curlers

Yes, you can find books by/about the Ferbey Four, Brad Gushue, Vera Pezer, CBC host Scott Russell and more, but one of my favourites is Sandra Schmirler, the Queen of Curling, by Perry Lefko, the poignant story of Sandra Schmirler and her team of best friends. A wonderful woman, friend, wife and mother who also happened to be one of the game’s best-ever curlers. She won us a gold medal at Nagano, and she died far too young. This is a compelling (but kind of sad) read.

9. The Black Bonspiel of Willie McCrimmon by W.O. Mitchell

No, it’s not a book.  But it’s great reading (and I’m not just saying this because I’m the associate editor, either). Curling Olympian and Managing Editor, George Karrys, finds curling stories that matter – and entertain, too. Want your curling bits in small bites throughout the season?  Subscribe. Very simple – and very rewarding.  Here’s how: click!  There’s a blog, too.

So, take THAT, hockey!  Curling literature is well-established and growing. Read and write on, curlers!

One last note: And if you’re tracking down John and Cheryl on the CCA website, you might find my blog there too, Around the House, for recreational curlers on and off the ice. 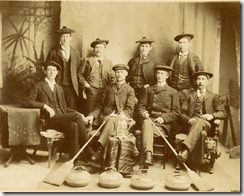 While doing some research for the blog I write for the Canadian Curling Association (Around the House), I came across this hilarious feature from the CBC Video Archives featuring the 1983 MCA Bonspiel.

Okay, it’s not quite as archaic as the photo (left) of some big winners at the Fergus Curling Club in days of yore.  But it has its moments.

The clothes! The deliveries! The sweeping styles – and oh, the wonderful sight and sound of those corn brooms! The drinking! The smoking! The “curling is dumb” attitudes!

But the most hilarious part is reporter Tom Alderman’s commentary.  “Turgid, slow, mind-numbing” are a few of the adjectives he uses to describe our sport – the same sport that brought thousands of wildly cheering fans to the Olympics curling show last February and thousands more to join clubs across North America in the past year.

The reporter’s focus on drinking and out-of-shape athletes doesn’t come as a surprise (curling culture was a wee bit different in 1983 it appears), but don’t despair. One curler steps up the mike to defend the sport against Alderman’s determined effort to put it down.  Can you guess who that is?

Check it out, here. Too funny!

Men With Brooms: Sort of kind of getting there…maybe?

Okay, it’s early November, and I’m not getting it, yet.  Men with Brooms, I mean.

The actors: I like. Mostly.  I especially like Brendan Gall, our hero (although it took me a couple of weeks to remember that his character’s name is Gary, and that can’t be a good sign). He gets down to throw, resembling a praying mantis – or a giraffe, I’m not sure yet – and actually looks not too bad. A typical club curler and guy with a job that requires him to wear work clothes. Sense of humour.  Sometimes cranky.  Knows how to hold a beer bottle.  Okay, this is real life.

The other actors? Well, their appeal is closely tied to the writing.  I’m trying hard, CBC, I really am.  But that Corner Gas feel just isn’t there yet.  Paul Mather is a good writer. Unique. Subtle, you might say.  So subtle that it’s just not connecting – well, not with me, anyway.

The cranky club manager, Bill. The buddy (is he stupid or just acting stupid?), Matt.  The new girl in town, non-curler April, who might or might not be Gary’s crush (still not clear). The whiny, non-meat-eating donut shop owner, Pramesh, whose wife, Rani, seems ten times smarter than he is.  The wily bartender, Tannis, who walks out on to the ice in (check them out, here) street shoes.  Really?  Fail!

But then all-star Canadian actress extraordinaire Fiona Reid showed up the other night, playing Gary’s mother, a tough Ladies’ League skip with a team of cesar-guzzling Ladies’ League players in tow. There was actually some curling humour in among the jokes about emasculated men. Some of the action took place on the ice.  The funny lines (most delivered by Reid) were – funny!

There’s hope. I hear Kevin Martin is making an appearance in an upcoming episode, and Paul Gross will show up in a later episode as well. The latest issue of The Curling News (first issue of the 2010-2011 season) features a full-page spread of stories and pictures from behind the scenes, thanks to TCN editor George Karrys who was, of course, the consultant on Gross’ 2002 trend-setting film. There’s certainly buzz. The show is getting viewers. The Globe and Mail reported on October 22: “In less than one month, more Canadians have watched this show than the movie on which it's based. The new comedy series has been generating a half-million or so viewers each week, even against tough opposition from House, Dancing with the Stars and other Monday-night staples.” That’s got to be a good sign, right?

I’m not sure yet, but I’m willing to hang around and see how this show shapes up, because I think it might be sort of kind of getting there, maybe.