Two weeks at the cottage in Nova Scotia means soaking in hours of beach time, reading lightweight books, exploring the shore, dodging squirts from those elusive razor clams, setting mousetraps in the cottage – and, occasionally, venturing forth into the countryside to see the sights.

The sights, for me, always include a search for the local curling club.  If you read my previous blog, you’ll know about my search for the Dawson City club while on a visit to Yukon in July. (In case you missed it, you can read it, here). 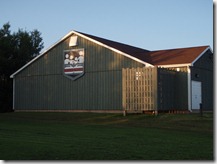 It wasn’t hard to find the new Northumberland Community Curling Club  which opened in December 2007 and appears (from the photos on its site, here) to be thriving. Check out the fireplace in the party room! Locals say the club is the result of complete community involvement, and curlers drive the winding roads around Pugwash, Wallace, Oxford and beyond to get their curling fix during the long Nova Scotia winter. 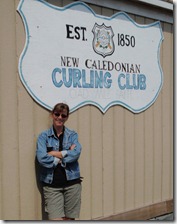 It’s a fine looking building, tucked in just behind the high school and easily accessible from the Gulf Shore Road.

And a few days later we spotted the New Caledonian Curling Club  (not to be confused with the Royal Caledonian Curling Club) near the wharf in Pictou, Nova Scotia, home of the Hector, the ship which brought the first Scottish settlers to New Scotland in 1773. (Okay, so it took a few years to establish the curling club. No doubt there were other important things to think about – like food, shelter and safety, perhaps?) Cool sign!

Any curling club sightings in your travels? Send me your photos (jrmills@rogers.com) and I’ll post them here. A hint: watch for a sign along the road, like this one in Pugwash: 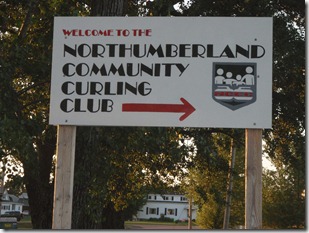