We love our hockey, but…. Some of the competitors at the Olympic curling games have been complaining about the noise fans are making before, during and after key shots.  Funny thing, the Canadian curlers love it!  And why not?  The noise demonstrates that the fans are really into the game, excited and engaged and, most importantly, following the action.  What’s to complain about?

Well, apparently there’s lots to complain about: just Google “Olympics curling noise” and you’ll find a whack of articles from news sources around the world, some simply reporting, some offering editorial comment on the tendency of the crowd to cheer or boo throughout the action.  It’s a new topic of conversation for the curling world, since in Canada and at other international events, the fans tend to be older, curling-savvy spectators who follow the unspoken rule: silence while curlers are throwing.

I wonder what baseball pitchers would think if the crowd buttoned it down for every pitch?  Or hockey players taking a shot during overtime?  Or a kicker in football? Why are we silent in some sports (golf, tennis, curling) and raucous in others?

(I can tell you that when I get into the hack to throw a shot in my Monday Night League, it’s not exactly silent.  I bet any of those Canadian curlers out there on the ice have been playing in noisy club leagues and bonspiels all their curling lives, and the noise isn’t going to bother them.)

The issue might be trickier when it comes to partisan fans booing opposing players as they get down to throw.  The traditional etiquette of the game calls for respect for one’s opponent on the ice, and yes, that should extend to the stands as well.

Love it or hate it, this could be the new trend in curling as a spectator sport.

TV Scribe praises the attractions of women curlers at the Olympics, and I’m ok with that

Curling takes a lot of abuse. Boring, watching paint dry/grass grow, not an Olympic sport – these are some of the comments thrown our way by the uninitiated.

But Globe and Mail TV columnist John Doyle has an open mind. Readers know that soccer is his game, but he’s not above giving a few plugs for curling. Now, John is approaching the game as a TV critic, remember, so his take on curling has much to do with the visual rather than the sporting aspects of our sport. And he finds lots to comment on about curling as a TV sport: in particular, the attractions of women curlers. Remember the whole Colleen Jones thing a few years ago?

He’s moved on, and today’s article in the Globe and Mail is worth a look.

OK, so he has to make the “hard, harder” joke. Yes, yes, very funny. But he also refers to our “dead cool” Canadian team, led by Cheryl Bernard, and makes an indignant reference to the deadbeat who stole Miriam Ott’s uniform and curling shoes from the team van in Winnipeg. In other words, it’s not all “poke fun at the curlers” in today’s article.

In fact, he gets it absolutely right: “Tuesday’s Canada-Switzerland matchup was thrilling. A tense, tricky 5-4 victory for Canada,” Doyle writes.

Now, I wonder if he noticed that wonderful moment when Bernard accidently stopped a Swiss rock after a take-out, and Ott – in the spirit of curling that is unmatched by any other sport – simply moved the stopped rock to where she thought it might have rolled to: the back of the 12-foot. Ott could have chosen to leave her rock in the 4-foot, where it might have counted in the score. That’s her right as the non-offending skip in a burned rock situation. But of course, she didn’t. And she lost the game by 1 point.

And if you want to check out some great photos of men and women curlers at the Olympics, check out the VANOC curling site, here. 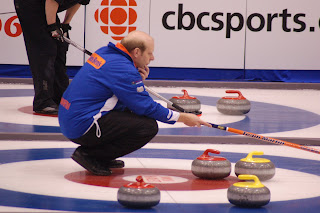 We Canadians all hope the final game in the Olympic Curling competition comes down to Kevin Martin's last rock (against Great Britain's David Murdoch probably). And (of course) we all hope that the rock doesn't slide a couple of inches deep, as it did the last time Kevin had a shot at the gold medal.

(On that occasion, our entire Monday Night Curling League at the Guelph Country Club dropped our brooms and came into the club room to watch the final rocks of the last end. When it was over, and we had recovered a little, I found it very hard to return to my game. The disappointment was so intense - and I was just a lowly club curler watching it on TV in Ontario. I couldn't begin to imagine what Kevin and his team were feeling...)

So here's to Olympic curling, and the hours and hours and HOURS of practice and competition and dedication it took these athletes to get there. Those of us who have dabbled in competitive curling might understand how tough it is. So few of us actually get to those elite levels. That's ok, though, Grassroots Curlers. Competition is competition - a test of skills, both physical and mental - no matter what level you compete at. 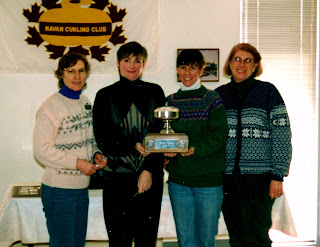 -lived career as a "competitive" curler happened in the small town of Vankleek Hill, in Eastern Ontario. I joined a team with three other novices and we entered bonspiels and events intended expressly for "new" curlers with less than 3 or 5 years' experience. We had a blast travelling around to clubs in our region and as far away as Ottawa and Montreal.

And we won our share too! See us proudly holding our trophy at the Navan Curling Club near Ottawa, some time in the early 1990s (I'm second from the right). And we posed on the ice with our competitors at the Lachine Curling Club after winning some other event. That's me, far right, looking pretty cool in my team jacket and (fashionistas, please turn away now) hat. 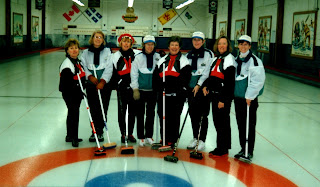 So cheer for Kevin (or John, or David, or Cheryl, or Annette - whoever draws your Olympic allegiance) but don't forget to dream your own competitive curling dreams, no matter what modest heights you achieve.
Posted by Jean Mills at 8:28 AM No comments: