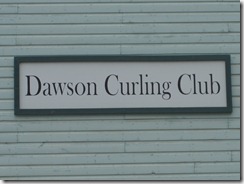 My dad used to say that if he found himself suddenly plunked down in any small Ontario town, he’d be able to find his way to the beer store.  There’s just something predictable about the placement of that all-important supplier of refreshment.  It’s like knowing (nowadays) where the Tim Hortons is (on the strip coming into or out of town, near the gas stations and the Wendy’s/Harvey’s/McDonald’s, right?).

I thought of Dad’s talent for navigation recently as I made my way up and down the streets of Dawson City, Yukon, searching for the curling club.

Dawson, what a place: a Canadian town that owes its cheerfully independent character to the men who moiled for gold as the 19th century eased into the 20th.

First, there’s the fast-flowing Yukon River, part Yukon silt and part Klondike clear. When we were there, the Yukon River Quest race was on. Canoes and kayaks of all sizes were pelting for the finish line in the annual competition that starts in Whitehorse and ends when the paddlers reach the dock in Dawson. Throughout our days there, we would suddenly hear horns blaring and voices raised in celebration as another team of tough paddlers arrived. Out of over 70 teams that started, only 54 finished. (Winners this year, “Texans”.  We were there to see the third place team pull in – intriguingly named, “Breaking Wind”…) 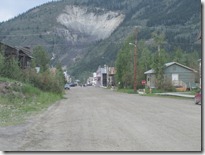 Second, there’s the ambience, if you want to call it that. That late-nineteenth century frontier vibe is everywhere: in the somewhat dilapidated (purposefully, make no mistake) clapboard buildings; the boardwalk sidewalks on either side of dirt roads; the overgrown lawns that nobody wastes valuable time worrying about; the well-trained, leash-free dogs who travel everywhere with their owners; and lastly, the wilderness looming at the end of every street.  River, forest, rocky hills. And some of the most friendly people you could ever meet.

So, on my journeys around town to see Robert W. Service’s house and the old Palace Grande Theatre, I kept my 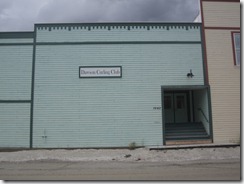 eyes peeled for the unmistakable signs of a curling club.  You know, long and low, a parking lot, and a sign on the front door saying some version of “Leave street shoes at the door and help keep our ice clean!”

And at last, I found it! Long, low and green. Parking lot out the back, sign on the front door. Of course, nobody  was home (this being July), but no matter. Curling in Dawson is obviously alive and well - right next to Diamond Tooth Gertie’s, one of the town’s biggest attractions (gambling, showgirls, drinking – you get the picture).

In Dawson City, where else would the curling club be?