I had the most astonishing conversation with a fellow curler at my club after our Wednesday night game last week.

“What’s that?” she asked when I waxed enthusiastic about the team who would be representing our club (Guelph Curling Club) at the regional playdowns of the Dominion Curling Club Championship this weekend.

“What’s the Dominion Curling Club Championship?” she asked when I mentioned this team, as well as another curler we both know who would be competing across town at the men’s playdowns.

She had no idea what the championship was all about.

“I guess you have to be an avid curler to know about this stuff,” she remarked, which is where the astonishment kicked in, because this woman is definitely what I would call an avid curler. She’s on the club executive, volunteers for all events, curls and bonspiels regularly.

How could anyone NOT know about the Dominion?

It’s Year Two of this initiative, sponsored by The Dominion of Canada General Insurance Company, to offer club curlers a chance to compete for a national championship. We’re talking airfare, hotel, pipe bands, uniforms, provincial and territorial banners – and bragging rights to the kind of national curling prestige normally reserved for the Brier or Scotties.

You can read about this year’s event in the season’s first print issue of The Curling News (and I know this because I wrote the article!). You can also check out The Dominion’s site which has news and photos from the inaugural event last year, and follow the event on Facebook (look for the link at the bottom of The Dominion Curls homepage).

In any case, club curlers across Canada should get informed.  Here’s a curling event that could take you – yes, you! – out of your club and drop you in the middle of a national championship, providing the experience of a lifetime (not to mention, lots of swag).  You don’t have to be an “avid” curler to know about it – just a curler.

Posted by Jean Mills at 3:35 PM No comments:

Looking for Answers to Some Curling Questions

Ok, so they’re not really important questions. But all the same, I’m just wondering…

1. Why is there no curling coverage in the fancy new Globe and Mail?

The cash spiels have started from coast to coast. Results and stories are showing up on the internet and Twitter, including reports of the big teams launching themselves into the new season – Kevin Martin, Jennifer Jones, Jeff Stoughton, Glenn Howard, the Scots, the Americans. Come on, guys. Where are those sports reporters, anyway?  I can read column after column about soccer, football, golf, tennis.  Did any of those sports win us gold and silver medals at the Olympics, drawing millions of fans on TV and thousands of hooting and hollering – and singing – fans at the rink? Curling probably sold a few newspapers, too. I want to know why Canada’s national newspaper is missing in action.

2. How many learn-to-curl sessions are being held across Canada and the United States over the next week?

A quick online surf shows club after club after club enticing newbies to come out and give it a go. An open house at the Beaver in Moncton. My own club in Guelph. Glenmore, Wolfville, Red Deer, Whitehorse – and that’s just a quick Google search. Twitter is atwitter with announcements, too. Curling club open houses and learn-to-curl sessions are everywhere. If somebody kept a tally, what would the grand total be?

And my last question:

3. How can I get Rick Mercer to visit my curling club?

He goes ice sailing, sidecar racing, bungee jumping. He plays soccer with Toronto Football Club and sledge hockey with our Olympic team, all on national TV. He’s everywhere – including on the ice with the Olympic wheelchair curling team.  So what’s the secret? Do I have to be an Olympian? He has a gift for reaching out to regular Canadians doing regular, everyday activities.  Well, there’s nothing more everyday than a Wednesday night social league at the local club. Can somebody tell me how I should persuade Rick to come out and play a few ends with me and the girls at the Guelph Curling Club?

Okay, I’ve had it with the “curling is funny” line

You curl. I curl. Lots of people we know curl. Are you funny?  Am I?

(No, actually, I’m not.  In fact, I’m a terrible joke teller and often need punch lines explained to me.)

The point is, “curling is funny” leaves me shaking my head. Football is funny (tight pants, crazy moves).  Soccer can be pretty darn funny with all that dramatic embellishment going on. Surely it’s all in the eye of the beholder.

And some beholders seem to have goggles on when it comes to curling.

The Curling News blog published a piece about the new CBC comedy, Men With Brooms. I don’t need to give you the drill: same people who did Corner Gas, based on Paul Gross’ affectionate but slightly off-base curling movie of the same name, etc., etc. The post includes links to the usual media outlets giving their reviews of the pilot, reviews that were pretty predictable (“the show is more about the people than it is about curling”). All good.

But then the Canadian Press piece starts: “There is something inherently funny about curling….”

Okay, hold it right there.

Which characteristic of curling makes the sport so funny,exactly?

Is it the balance, flexibility and strength required to float a rock down the ice to the button?  Or throw a take-out that gets everything moving and clears the house? 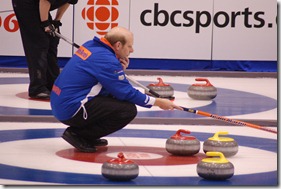 Is it the judgment required to determine – using eyeball or stopwatch, doesn’t matter – when that rock is going to slow down, where it’s going to dig in, how it’s going to finish?  And with that goes the power to drive those brushes into the ice without letting up until the rock hits its target or grinds to a halt. Try it – it’s not that funny.

Is it the skips’ hollering that seems funny?  Is it the “Hurry hard! Harder!” which has drawn far too many sophomoric innuendos from uninformed non-curlers?

Curling is not “inherently funny”. Just ask Kevin Martin, pictured above at a Grand Slam event in Guelph last January. The Olympics brought curling’s appeal to the front of the sporting stage – it also showed that “funny” and “fun” are not the same thing. Curling – and curling fans – are fun, no doubt about it.