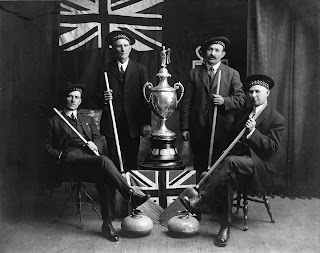 The 2009-2010 curling season marks the 175th anniversary of the Fergus Curling Club - the longest continuously-operating club in Ontario.

To mark the occasion, the club is producing a commemorative book that captures snapshots of its remarkable history. Including archival material, selections from club albums, newspaper clippings - some dating back to the 1800s - and photographs of more recent club events, The Fergus Curling Club Celebrates 175 Years illuminates the club's long and active history. Here's a preview:

"Where does the story of the Fergus Curling Club begin? With the first heave of a weighty stone across some patch of ice in seventeenth century Scotland? With the purchase of thousands of acres of Upper Canadian wilderness on the Grand River by Scottish settler Adam Fergusson in 1833? Perhaps it really begins when Hugh Black leaves Perthshire, Scotland and arrives in Upper Canada with his family late in the summer of 1834. There, overlooking the river, Mr. Black builds a tavern at the corner of what is now St. Andrew and Tower Streets, and this establishment becomes the small settlement’s hub of activity.

Picture the scene as autumn 1834 turns to winter – a long cold winter that year, according to historians – and the landscape freezes over, including the rough road outside the tavern. Mr. Black eyes the stretch of ice extending for some length, dotted with the stumps of felled trees. He’s seen stretches of ice before – on the rivers and ponds of his Scottish home: ice means curling, a game that Mr. Black knows.

In fact, most of his neighbours are Scots as well, familiar with the sport of curling from their homeland. What better place, Mr. Black thinks, to combine vigorous outdoor activity with an entertaining way to pass the long winter than the stretch of ice in front of his tavern. The curlers can play a few ends, retreat to the tavern for refreshment and warmth, then resume their play until cold, darkness or a solid take-out ends the game.

There, throwing wooden blocks fixed with handles and sometimes loaded with iron for extra weight, the first Fergus curlers – Hugh Black Sr., his four sons, Hugh Jr., William, James and Robert, his sons-in-law James Perry and Robert Garvin, and neighbours James Dinwoodie, James and Thomas Webster, and William Buist – would have had no idea that one hundred and seventy-five years later, curlers would continue to throw stones down the ice, now in the comfort of the Fergus Curling Club, enjoying this sport that combines physical skill with mental ability and an inherent respect for the opponent."

The book will be available at the start of the 2009-2010 curling season - part of a busy Anniversary Year for Ontario's longest-running curling club. Watch for news of further anniversary celebrations from Fergus, Ontario - where they've been curling every year since 1834!
(Photograph courtesy of the Wellington Museum and Archives)
Posted by Jean Mills at 10:10 PM