Throwing Stones, Part Two: Now we know why the CBC didn't pick up this show 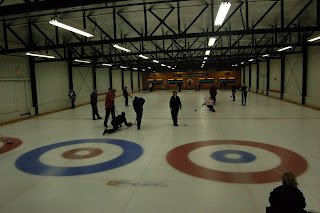 If the pilot of "Throwing Stones", broadcast last night on CBC, was supposed to reflect the experience of grassroots curlers, it hogged. Badly.

First, it was silly. Enough said.

Second, it's hard to believe that the supposed club champions could have such lousy deliveries and sweeping technique. (And I'm sure that hair brush burned the rock in one shot...)

Third, a winning team that celebrates by taunting the losers and marching off the ice without shaking hands or sitting with their opponents to share a drink after the game would be drummed out of any club in the country. And that includes the losing team member who threw her gloves on the ice and stomped off in anger.

OK, this show may have been juiced up for television, but it was hard to watch.Which is too bad.