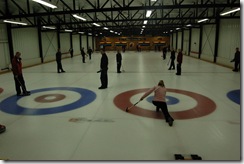 Coming to St. George’s Golf and Country Club in west Toronto the first week of November, The Dominion is the first-ever national championship for club curlers – yes, regular league curlers, not the teams that make it through zones and regionals to the provincials and beyond.  Eligibility rules allow each team to include one player with recent national or Grand Slam experience, but the intent is to give ordinary curlers an opportunity to taste the big time.

We’re talking about club teams from every province and territory in Canada that dominate the league, triumph at the end-of-season championship, or win the big club prize.  Gander’s Scott Davidge will be there.  So will Whitehorse’s Helen Strong.  BC teams are on their way.  Ontario will finalize its provincial winners at the end of October.

The CCA will have end-by-end scoring for those fans who want to follow their team.  Check out The Dominion championship – a new way to celebrate grassroots curling at its best.