Guelph’s Alma Laidlaw has the button – and $1 million - in sight! 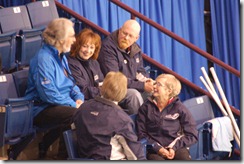 A few weeks ago, my curling buddy Alma Laidlaw came closest to the pin at The Swiss Chalet National Grand Slam event at the Sleeman Centre in Guelph.  There, during the fourth-end break, she out-drew five other contestants and won a trip to Winnipeg for the big, really big, chance to draw the button for $1 million in the Capital One Million Dollar Button contest.

“So what’s your strategy?” I asked her before her draw in Guelph.

“Throw it and pray!” she answered. (There’s Alma, bottom right in the the photo, taken before the draw at the National on January 10).

Well, her “prayer” has been answered.  She’s done it again and out-drawn five other semi-finalists to earn the chance for $1 million.  During the fourth-end break of the final game on Sunday, she’ll be out there in front of the crowd, throwing and (I’m pretty sure) praying.

She’ll be nervous, that’s for sure.  But she also told me that the trip to Winnipeg with her husband, George, being treated like gold by the Capital One folks, and simply having the chance to participate in this event is all the prize she needs: she already feels like a winner.