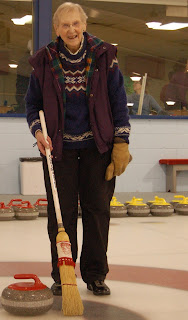 With the National coming to Guelph this week, my friends at The Curling News asked for a quick preview of how the Guelph Curling Club (members of which make up the local organizing commitee) is getting ready. No sweat. After my regular Monday night game, I talked to a few of the more involved members of the club and heard about the fantastic response from volunteers, right from Day One.

But the best conversation was with one of my Monday night colleagues, Hilda Peterson. She's a long-time curler, originally from Manitoba, but celebrating 47 years with the Guelph Curling Club. Yes, that's what I said: 47 years.

Hilda's big moment is coming during the opening ceremonies of the National tomorrow night when she'll hold the broom for the ceremonial first rock (thrown by another veteran Guelph curler, Bernie Austin).

Certainly not me! Go, Hilda!
Posted by Jean Mills at 8:13 PM